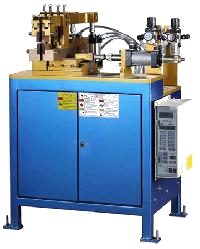 The ends to be welded touch each other before the current is switched on. A heavy current is then passed from one piece to another and the contacting faces are heated up due to the contact resistance. The two pieces are pressed together firmly after the desired welding temperature of 870 to 925 oC is reached. The pressing action which results in the increase in lateral dimension of the workpieces is called upsetting. Upsetting takes place both during and after the current flow. The upsetting action results in welding of end faces with squeezing of a part of the softened metal to form a fin, which can be removed later, if required, by machining.

Resistance butt welding is used for end joining of rods, tubes, bars and similar other sections. However, an important application of this process is the large scale production of tubes and pipes at a high rate of production and the process is then referred to as resistance butt-seam welding or simply as electric resistance welding (ERW). In ERW process, the strip for tube making is continuously edge shared and rolled into tube for forming a longitudinal seam.

Current of upto 40,000 amperes at 5 volt is introduced across the joint by split electrode rollers and the force is applied by the pressure rolls. In this process, both the work motion and current and supply are continuous. The flow of current through the shunt path is avoided or reduced by the use of ferrite or wrought iron ‘impeder’ placed inside the tube.

The maximum speed of production is controlled by the frequency of the current as that decides the number of zero-current periods per unit time. Frequencies upto 350 Hz are commonly used which results in the production rate of about 36 m/min. The fin formed due to extruded metal is continuously removed by cutters and the desired length of the tube or pipe is cut on the production table without any interruption in the process of welding.