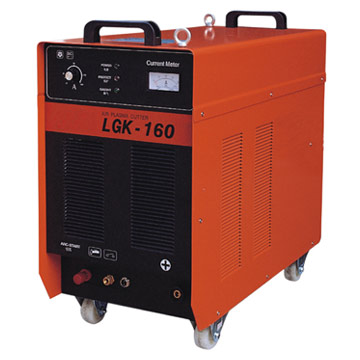 Plasma is defined as a flow of ionized gas. It is obtained by passing the gas through a high temperature arc which results in splitting the molecules of gas to atoms and then to ions and electrons.  Through plasma flow takes place in most of the arc welding processes but in the process called plasma arc welding whole of the gas is converted into plasma by making it pass through a very narrow passage of high temperature arc.

The plasma welding machine was developed in 1925 but its industrial use for welding is reported to be form 1953. For welding, the plasma is also provided an outer envelope of a shielding gas.

Energy of plasma welding machine is obtained invariably from a dc power source of the constant current type having an open circuit voltage of 70-80 volts and a duty cycle of 60%. The welding current employed range between 100-300 amperes.

There are two variations of the plasma arc welding process called non-transferred type and transferred type. In the former, the tungsten electrode is the cathode and the nozzle tip the anode. Such a torch is very similar to ox-acetylene torch regarding its maneuverability as work piece is outside the electrical circuit. However, such a plasma arc is less intense compared with the transferred arc wherein the work piece is anode. But, the maneuverability of the transferred arc is restricted.  Such an arc, however, is very intense and the process results in higher thermal efficiency.

The temperature in a plasma welding machine can go up to 55,0000C but for welding it is restricted to about 20,0000C. This high temperature arc when it impinges upon the work piece results in reuniting of electrons and ions to form automatic and the molecular gas, releasing heat in the process which is thus utilized for welding.

Any gas that does not attack the tungsten electrode or the copper nozzle tip can be used in plasma welding. However, argon and argon-hydrogen mixture are more commonly used.

Compared with GTAW process, plasma welding machine, due to its high heat concentration, results in higher welding speeds to the extent of 40-80% Plasma arc welding is, however, comparatively a new process and not very popular, as yet. The actual process of welding with the plasma jet is by ‘keyhole’ process in which the plasma jet impinges upon the work piece and melts through and through and then torch is moved in the desired direction.

A variation of the process called micro-plasma welding uses current in the range of 0.1 to 10 amperes and can weld metal thinner than 1 mm while the range for the normal plasma welding 3-15 mm.

Through the plasma welding machine has high potential for the future use but it has certain serious drawbacks e.g. the intense arc results in excessive ultra-violet and infra-red radiation which can harm the skin even through the clothes necessitating special protective clothing for the operator. Also, the noise level in the process is around 100 db (decibel) which is far in excess of the safe working limit of 80 db for human ears.

Commercially the major users of the plasma users of the plasma welding process are the aeronautical industry, precision instrument industry and the jet engine manufactures. Typically the process is used for making piping and tubing made of stainless steels and titanium.