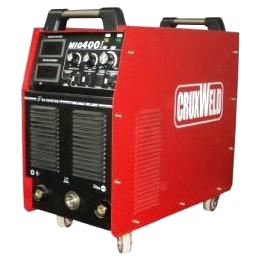 For 1.2 mm diameter electrode wire the welding current above 200 A results in the formation of drops at the tip of a conical region. The cone attains a quasi-stationary state with the liquid metal flowing into the base of the cone and flowing out at its tip. It has been shown expediently that for 1.2 mm diameter electrode the pencil-point tip forms for current higher than at which the electrode tip is completely engulfed by the visible arc root.

Most of the above discussion is in connection with solid wire mig welding machine (GMAW Welding). However, high speed fils of metal transfer in flux-cored arc welding indicate that the character of the transfer varies according to the flux. For example, with rutile flux core a fine spray-like transfer occurs whereas with a basic flux core the transfer is in relatively large droplets that form asymmetrically. The flux appears partly to transfer as a solid material which presumably melts on transfer to the weld pool. Overall it appears that as with SMAW the dominant factor, both for metal transfer and droplet transfer frequency, is the composition of the flux.

The introduction of the pulsed mig welding machine in 1960’s offered the opportunity of obtaining spray transfer at lower mean currents by introducing current pulses to detach droplets at controlled intervals, against a lower background current which maintained the arc and allowed molten drops to form. This has made it possible to use spray transfer for thinner materials and also in various welding positions.

Like metal transfer in constant current MIG Welding Machine (GMAW Welding), in pulsed GMAW it can also be classified into projected or drop spray and streaming spray. All features of the two transfer processes are the same both for constant current and pulsed GMAW. The first droplet transferred in pulse current welding is in the drop spray mode but subsequent droplets transferred during the same current pulse will be in the streaming spray mode.

The time for the formation and detachment of a droplet is inversely proportional to the magnitude of the peak current but is independent of its duration. Once the necking process has initiated the droplet detaches after a specific time which is characteristic of the wire diameter and peak current, and is independent of the current level at the time of its detachment. 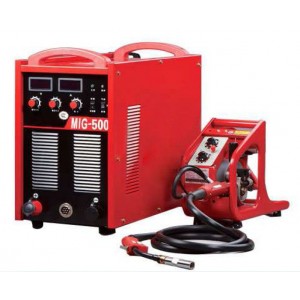